When you think of Santorini, the first things that are probably crossing your mind are its white-washed houses, its majestic sunset and of course its imposing volcano! What you might not know is that in Santorini there is one of the most important prehistoric sites of Europe! This is no other than the ancient settlement of Akrotiri! The Ancient settlement of Akrotiri is located on the southeast part of Santorini! Akrotiri excavation is a pole of attraction for those who want to explore not only the cosmopolitan side but also the past of this magnificent destination!

Although the island of Santorini was firstly inhabited during the Neolithic era around 4.000 B.C., it was not until the end of Bronze age, that the settlement of Akrotiri became one of the most important trade centers of the Minoan world! One of the factors that contributed to Akrotiri’s growth was its geographical position, as it served as a stop on the primary trade route between Cyprus and Crete, where it was the center of the Minoan civilization.

Akrotiri continued thriving for 500 years! Indicative of the settlement’s growth are its paved alleys, its high quality pottery and its sophisticated drainage system. Furthermore, because of its importance as a trade center, in Akrotiri were also found a great amount of imported objects from areas such as Egypt and Syria indicating the existence of a greater network of communication across the broad area of the Mediterranean basin!

The prosperous and sophisticated settlement perished abruptly in 1613 B.C. due to one of the most ferocious volcanic eruptions that ever occurred on our planet! This tremendous volcanic explosion also caused a major earthquake and buried the village under the volcanic ashes! 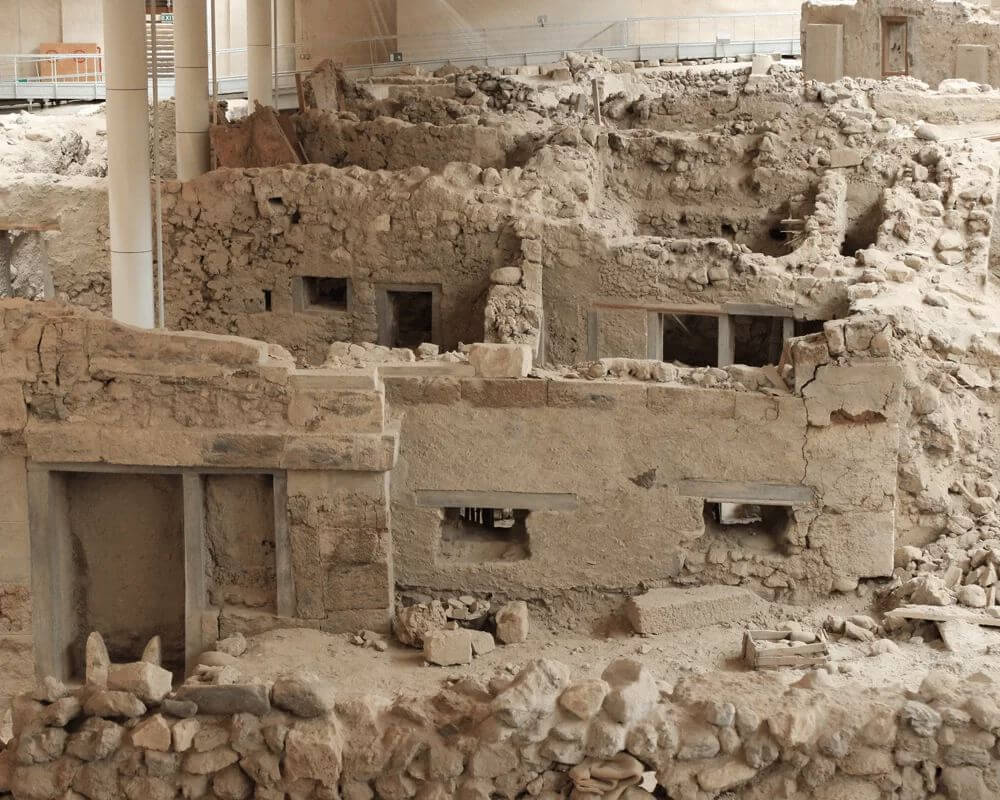 Akrotiri excavations over the years

Although the first excavations of Akrotiri were conducted by the French geologist F. Fouqueh in 1870! A more Systematic course of excavations on the area of Akrotiri began in 1967 and the aim of them was to prove that the volcanic eruption in Thera was the main factor that led to the collapse of the Minoan Civilization! A few years later the excavations started once again under the supervision of the archeologist Christos Doumas.

Today, visitors can wander around the remains of the city, observe the narrow stone-paved alleys and admire the ruins of the imposing buildings that were made of mud and stones! Thus, because Akrotiri used to be a trade center, the basements of the houses were used as storages and workshops.

Another thing that the visitors of Akrotiri can admire, is the fresco paintings on the walls of the ancient settlement! Fresco is a technique that was used by the Minoans. The technique included mural painting executed upon freshly laid or wet lime plaster. The colors mostly used were white, yellow, red, brown, blue, and black. Overall, the frescoes in Akrotiri are thought to be extremely indicative of the Minoan art, because of being preserved in such a good state allowing the archaeologist to conduct thorough studies on them. 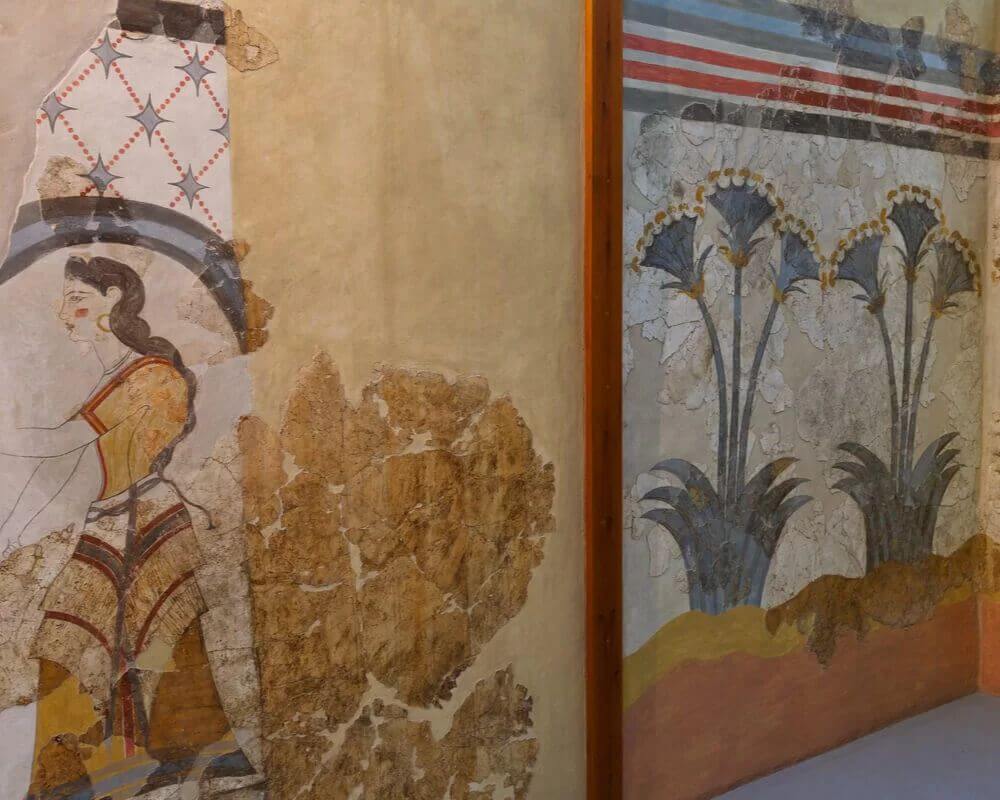 Although visiting Akrotiri is a great experience for those who want to discover everything about the prehistoric past of Santorini, you need to know that a lot of the findings of Akrotiri excavations are exhibited in the Prehistoric museum of Thera! Besides some beautiful fresco paintings of great historical value, visiting the museum, you can also admire Neolithic items such as tools, utensils and marble figurines that were religious items of great significance. 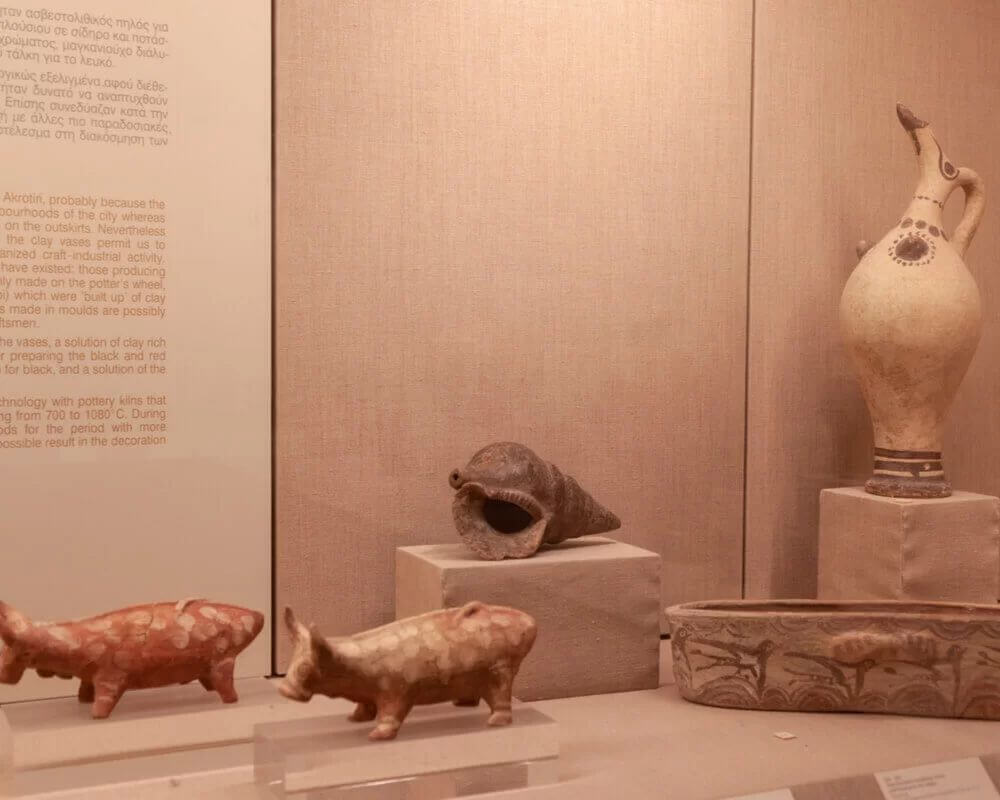 How to make the most of your Akrotiri visit

Last but not least, we are going to give you some extra tips in order to enjoy your visiting experience in Akrotiri to its fullest! If you decided to visit Akrotiri excavation, it is absolutely sure that you are going to need a guide. Because of that, we recommend that you take part in an organized tour in Akrotiri excavation, that will give you the chance to learn all the important pieces of historical information from an experienced tour guide!

As for your ticket, we recommend you to buy the special package 4 day ticket which includes visiting Ancient Thera, Akrotiri excavation, Archaeological Museum, Museum of Prehistoric Thera and also a great Collection of religious items at the settlement of Pyrgos!

In a nutshell, Akrotiri excavation is a historical site of great importance that you should absolutely visit once you get on the magnificent island of Santorini!

Rent your car from AutoCenter and discover not only Akrotiri excavation but also every single one of the many impressive sites that Santorini offers to its visitors!