The impressive cliffs of Santorini emerging from the Aegean Sea, its picturesque white-washed  houses overlooking the volcanic caldera and its traditional blue domed churches, make this beautiful cycladic island one of the places with the most spectacular views around the world. In this article you will discover the best views in Santorini, that will take your heart and your mind away. Visiting the locations recomended on the post, you will have the chance to take beautiful photos, picturing unique perspectives of the island. Moreover, you will have the opportunity to better understand the unique morphology of the island.

Oia holds a high place among the locations with the best views in Santorini. It is also one of the busiest spots on the island, as every year gathers thousands of visitors. This is partly because of the oia sunset, which might be the most known sunset on the planet. Built on the slopes of the Caldera, Oia offers to its visitors a great experience of visual sensation as the colors of its traditional buildings merge with the colors of  the sunset.

Although the Sunset of Oia is truly amazing, this doesn’t mean that its view  stops from being impressive during the rest of the day. Its spectacular view, is the main reason why Oia has been selected many times as a hollywood movie setting. With the most  popular movie, shot having as a backdrop Oia view, being “Lara Croft Tomb Raider: The Cradle of Life” 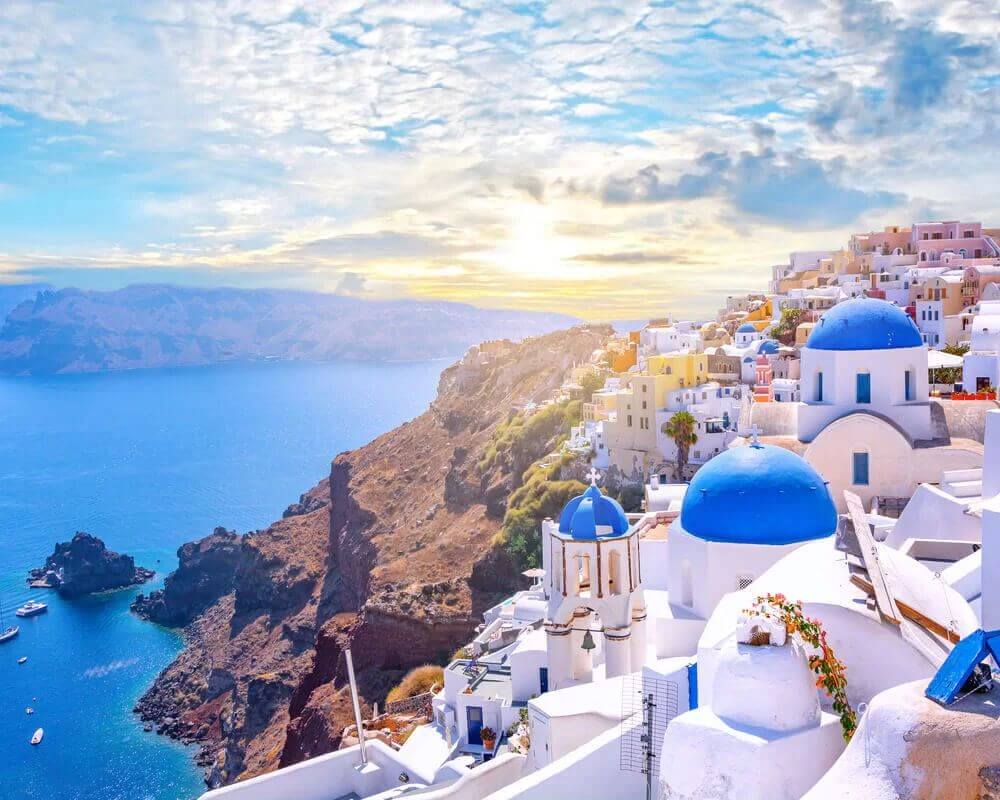 Imerovigli, also known as the Balcony of the Aegean, is built on the highest point of the Caldera cliffs. Its location offers to its visitors a unique view on the Volcano and the azure waters of the sea. Although, the largest part of Imerovigli was destroyed during the volcanic eruption, occurring in 1956 and many of its residents moved to the mainland, today imerovigli is restored and is one of the main destination for those who prefer a more tranquil side of Santorini and have a thing for dramatic views.

One of the best views in Santorini is that of Skaros rock. On Skaros Rock is settled the most important of the five fortified settlements located on the island.  The rock was inhabited during the medieval times, as it offered protection from the pirates. As the time passed, the forces of nature such as earthquakes and volcanic eruptions sculptured the rock in a unique way, making it one of the most imposing sites of Santorini. 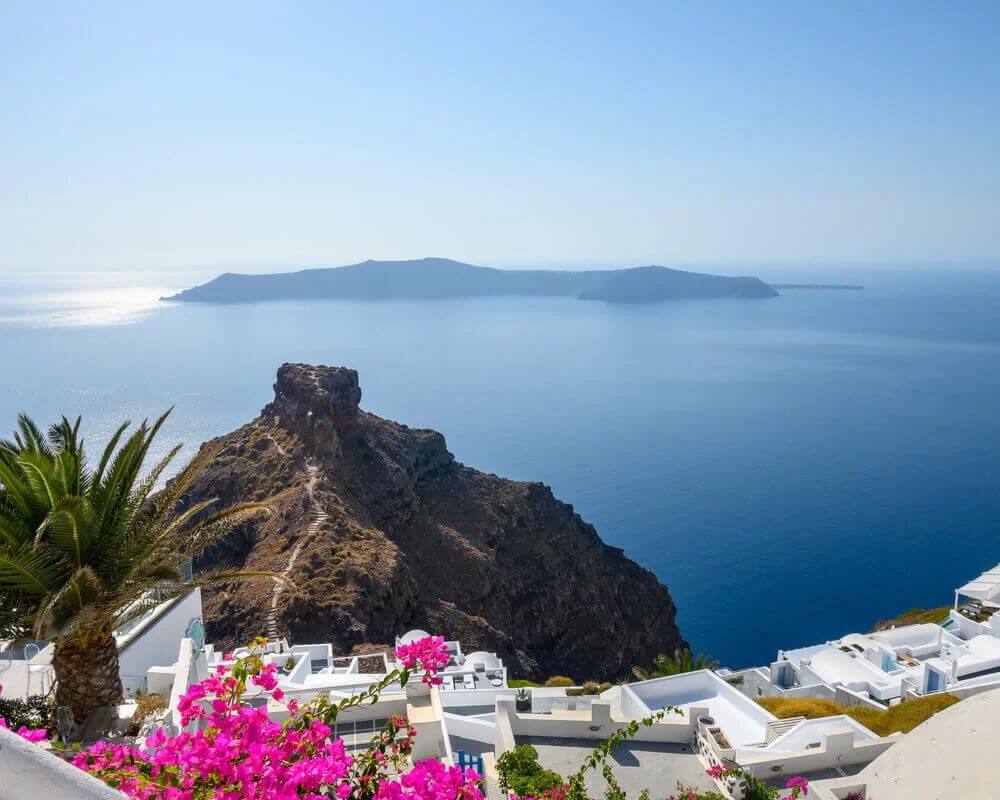 One of the best views in Santorini is  that of Vesa Vouno, especially  if you are keen on historical sites, as Mesa Vouno is the home of the ancient city of Thera. Ancient Thera was founded by the Spartan colonists during the 9th century BC. Although the excavations that took place at the end of the 19th century revealed an older settlement, most of the findings that you can admire visiting Ancient come from the Hellenic or the Roman times.

Mesa Vouno is a hill on top of the Village Kamari and in order to reach it you need to walk on a long path starting from the village. Although the hiking might be a little tiring, it is most certain that the view will amaze you.  From Mesa Vouno you will have the chance to admire two of the most beautiful villages of Santorini Kamari and Perissa. 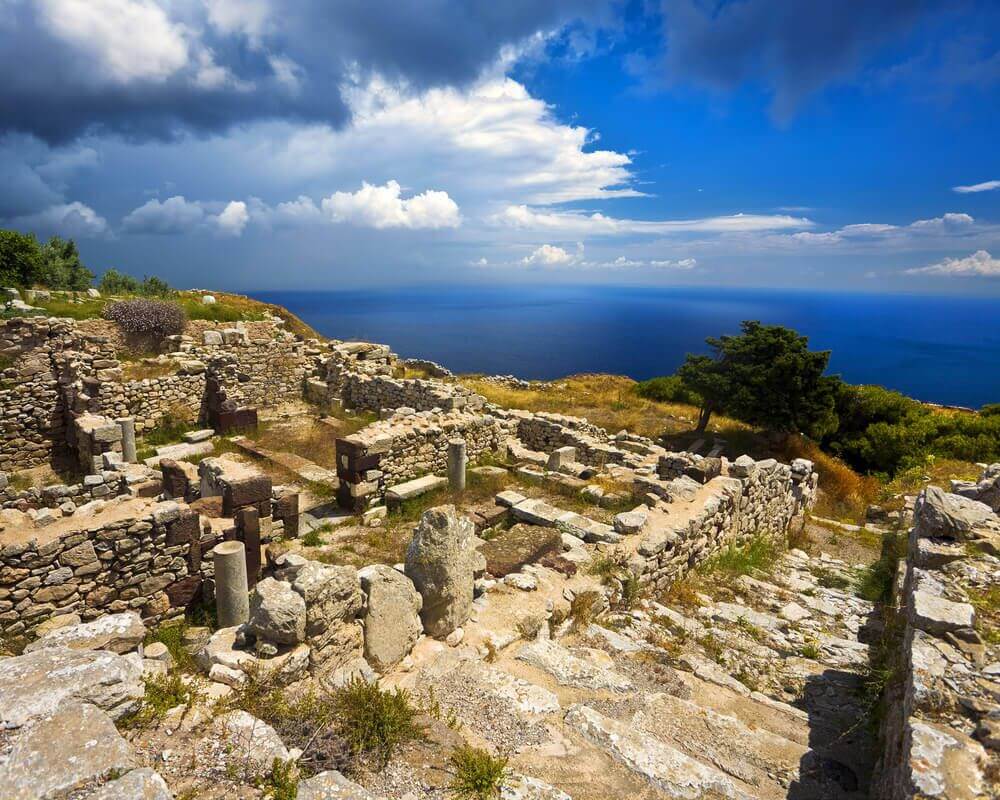 Watching the view from Akrotiri lighthouse, you will have some blissful moments that you can cherish for the rest of your life. Although the lighthouse is not a busy spot, it is one of the favourite places of the locals, especially during the evening hours, because of its great view to the Aegean Sea. Moreover, we highly  recommend that you take some photos of the lighthouse, in order to keep the memories of this beautiful setting forever! 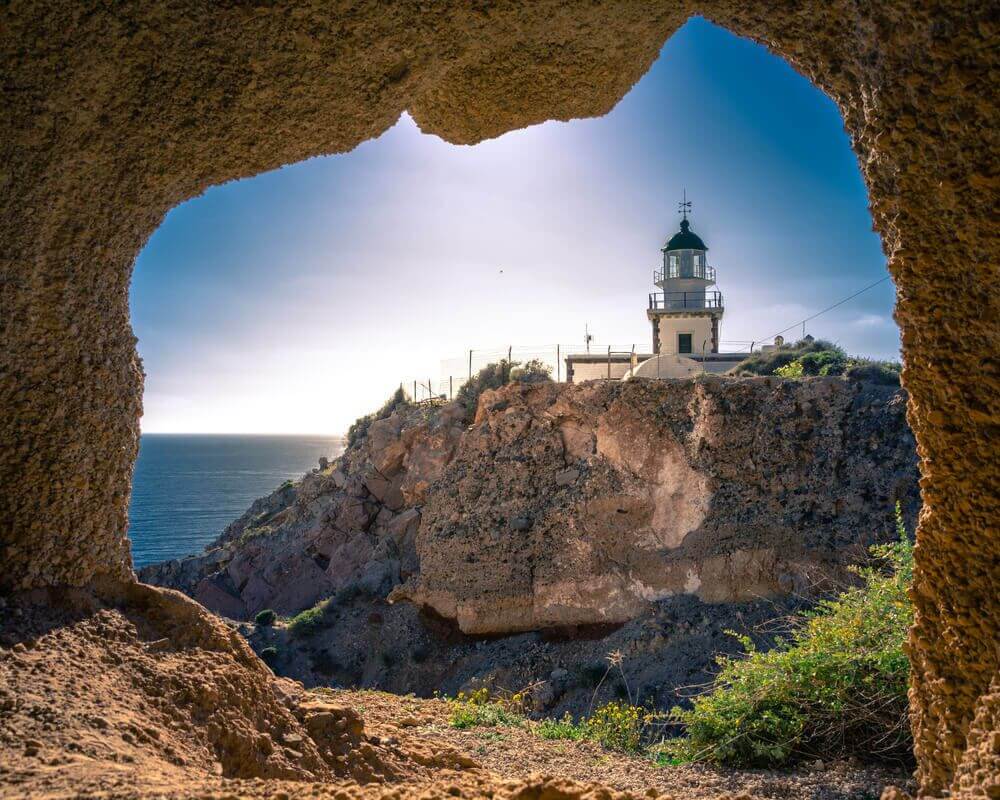 Regardless of what view of this iconic island will end up to  be your favourite, booking a reliable car rental will provide you with a hassle-free transportation to every corner of it.

Rent your car in Santorini from AutoCenter and meet your every car rental need on the island!