The island of Santorini is famous around the world for its dramatic volcanic views, its azure tranquil sea and of course for its magical sunset! Despite all these, Santorini is also a great gastronomical destination for those who seek a unique culinary experience! Santorinis’ cuisine is influenced by the traditional Greek flavors and is based heavily on the Mediterranean diet! Thus, it has not only rich and tasteful flavors but also healthy ones, prepared with pure agricultural ingredients of local production! Let’s start our gastronomic journey to the wonderful traditional cuisine of Santorini!

Santorini cuisine has roots that go back thousands of years ago! The food habits of the locals were always based on the products cultivated on the volcanic soil of the island! The island’ s food culture is based on pure natural local flavors such as Santorini fava, a vegetable that is similar to pea, and a type of cherry tomato that only grows in Santorini! Santorini traditional cuisine shaped its identity as we know it today, after the earthquake that took place in 1956. That was a key point in Santorini’s culinary history, as after that there was a rapid growth to the island’s tourism, which led to the opening of a lot of traditional taverns, perfecting the old traditional family recipes! 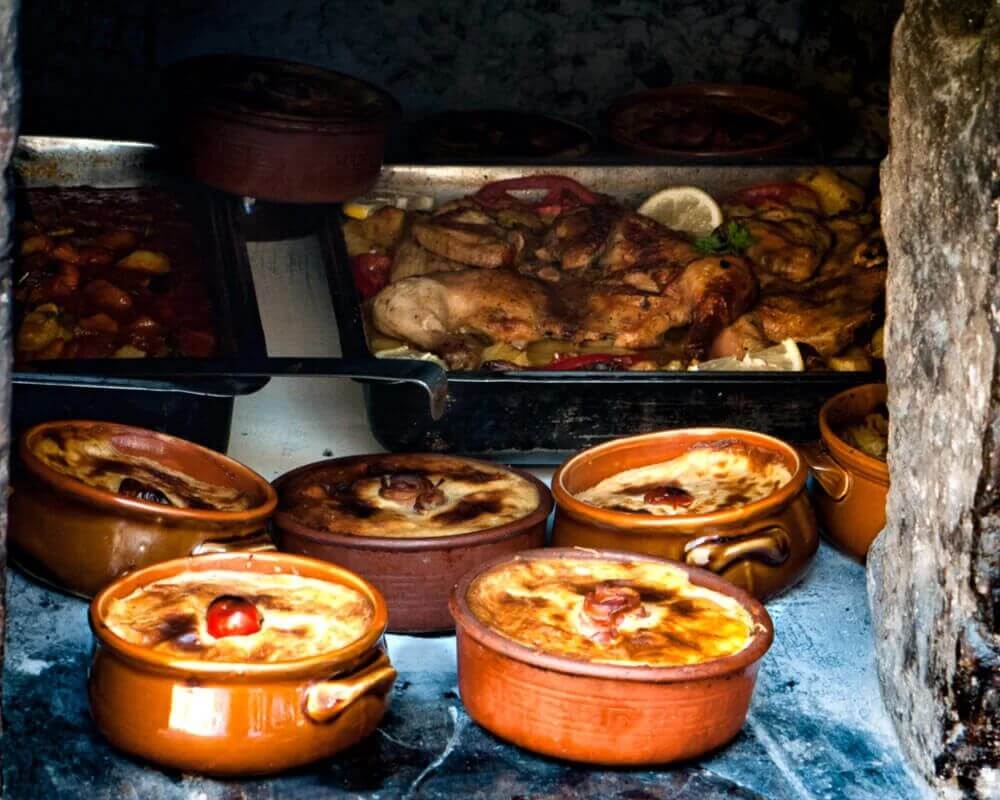 As it was stated before, fava of Santorini is a product only cultivated on the island. Actually, there are findings showing that fava was consumed in the ancient settlement of Akrotiri around 1500 BC. The most common and tasteful recipe of fava, is fava “pantremeni” which looks like a thick velvet soup, also consisting of fresh onions and local tomatoes.

In recent years, young chefs have used fava in some unconventional recipes such as tarts. Most of the visitors of Santorini though, prefer to taste the traditional recipe of fava, reflecting the culture of the island!

Apochti is a type of salted pork loin! Apochti is first salted, then marinated in vinegar and finally left to dry. After that, the meat is seasoned with pepper and cinnamon. The meat is ready to be consumed after becoming quite hard. This procedure usually takes up to six hours!

Ntomatokeftedes are one of the most delicious dishes of Santorini! They are tomato balls made of local cherry tomatoes, flour, onions and fresh mint. They are usually fried and  served as appetizers to the local restaurants.

Chloro cheese  is one of the most characteristic flavors of Santorini. Chloro cheese is a fresh cheese made from goat milk, It has a soft texture and a unique flavor. Although its production is limited, you will find it in the local markets of Santorini but also to the menus of traditional Santorini restaurants. Chloro replaces the classic feta in the Santorini variation of the traditional Greek salad. 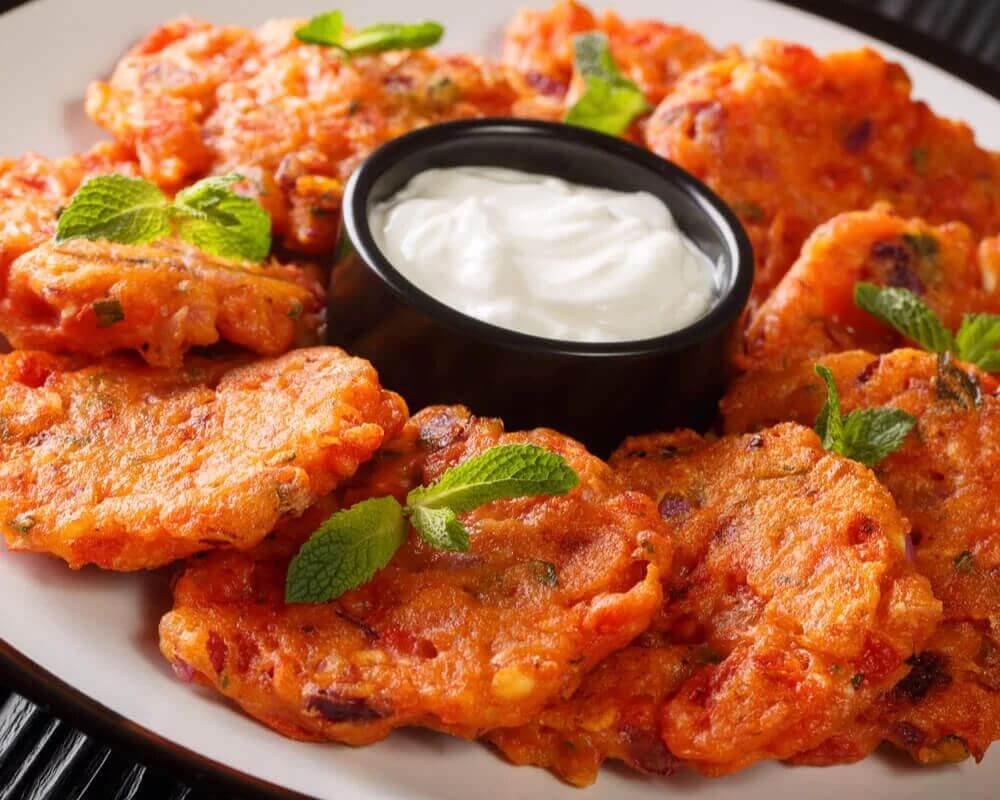 Kopania are a sweet treat that is quite popular in Santorini and is interwoven with the local cuisine. Kopania are small bites, made of crushed barley rusks, mixed with raisins and sesame seeds. The mixture is shaped into little balls and drizzled with more roasted sesame seeds. There are many versions of Kopania recipes, one of them also contains wine and coconut. Kopania is a dish that also has a cultural importance in Santorini’s social life, as it is usually served at happy occasions, such as weddings!

Santorini wine is a great part of the traditional cuisine of the island as it is used in a lot of the local recipes! Furthermore, it is a great pair with most of the traditional  specialities as its unique aromatic flavor and its high acidity compliment their taste! If you enjoy a local dish containing red meat, we definitely recommend pairing it with some rich red wine such as brusco. On the contrary, if you seek a pair of seafood dishes you should absolutely try some of the famous white wines of Santorini. One of them is the famous assyrtiko, which has a crisp and mineral flavor! 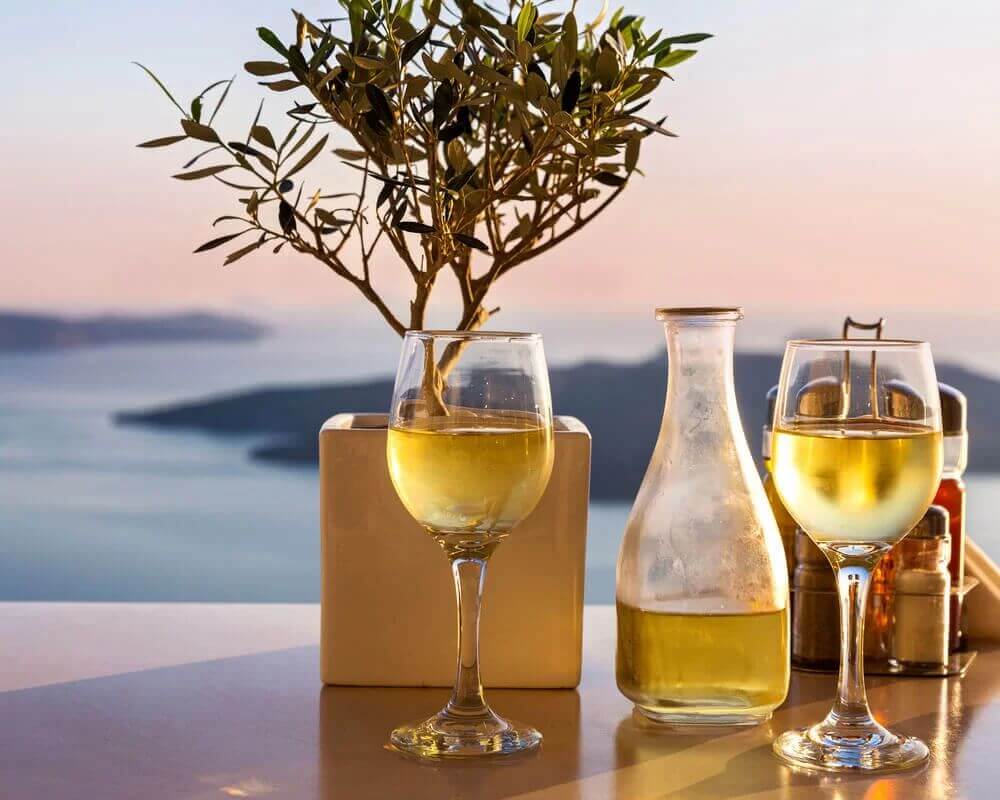 Rent your car from AutoCenter and discover all the unique tastes of Santorini traditional cuisine, driving in every corner of the island!